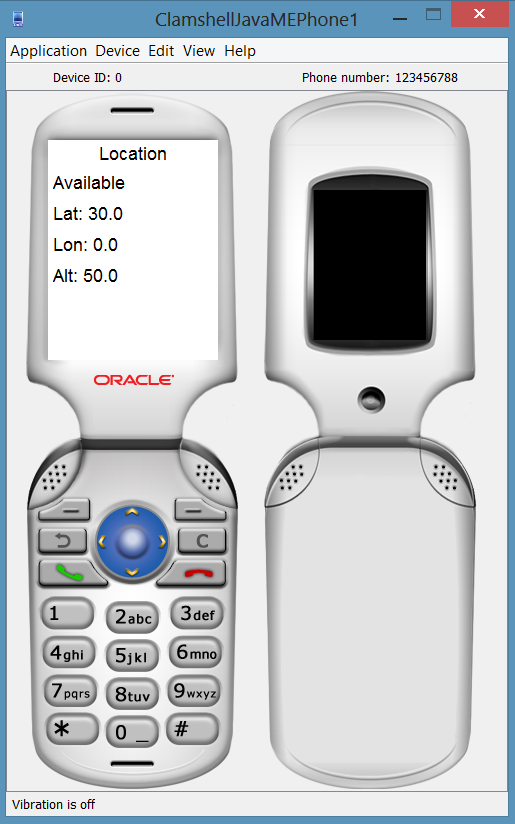 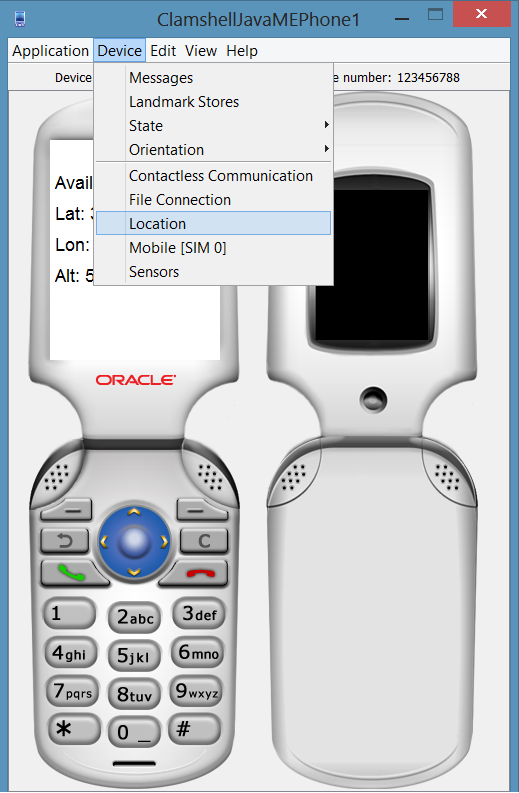 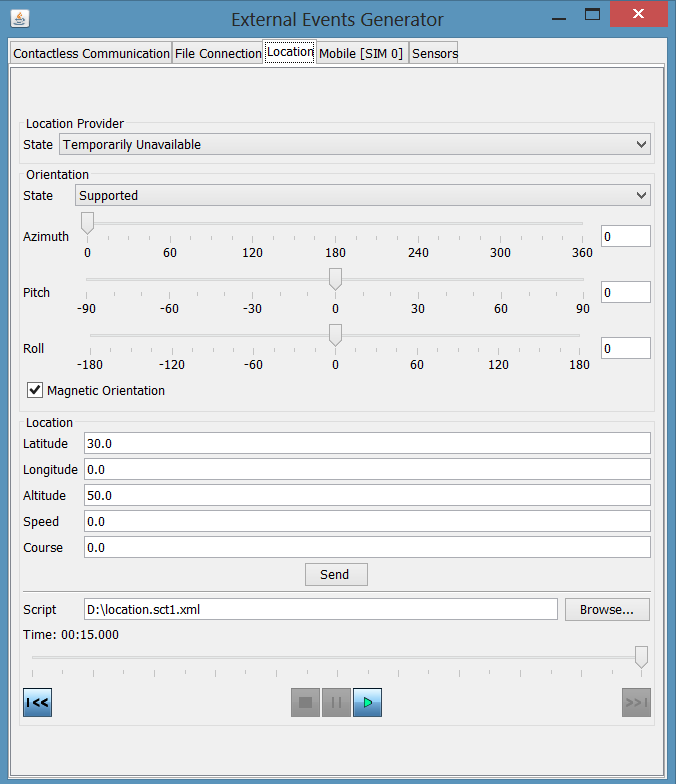 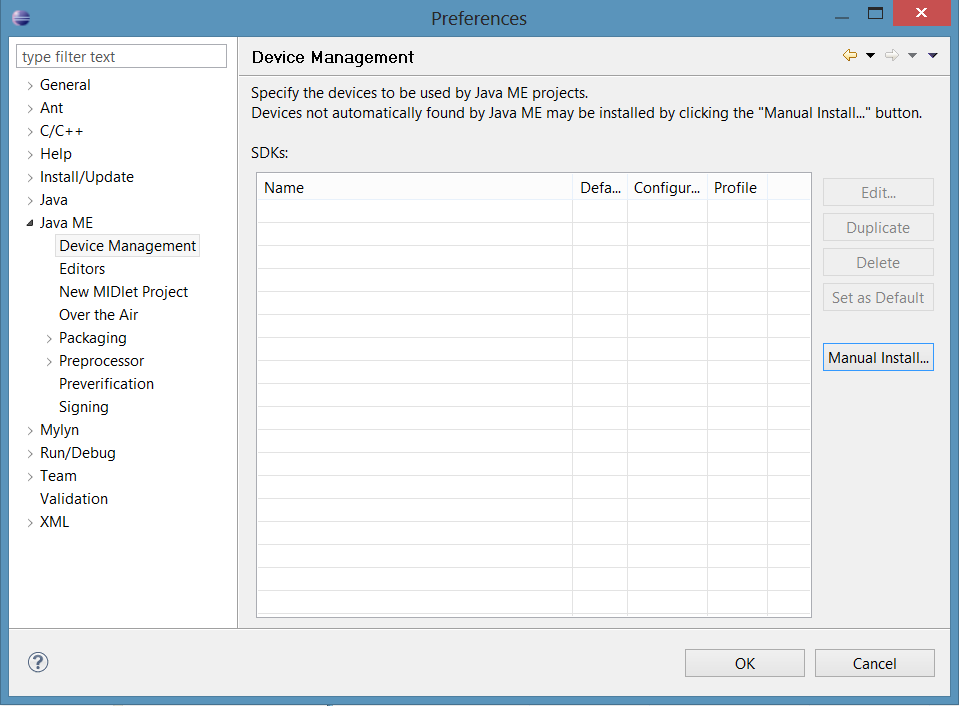 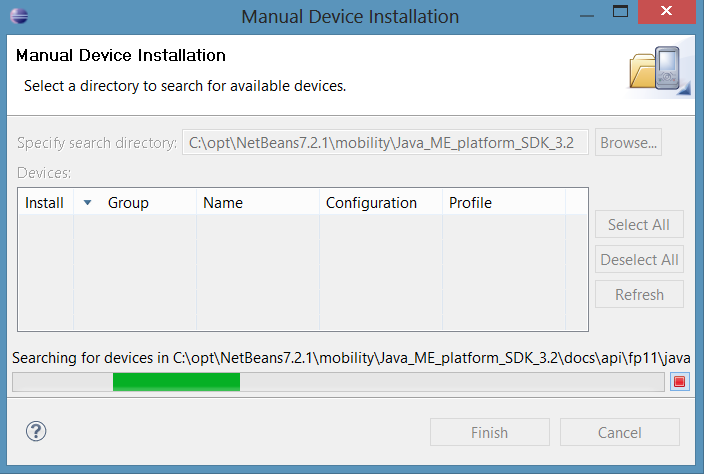 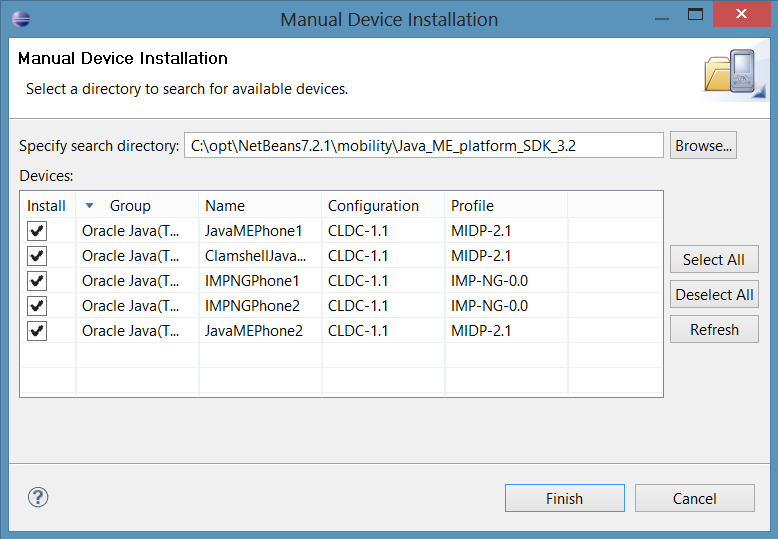 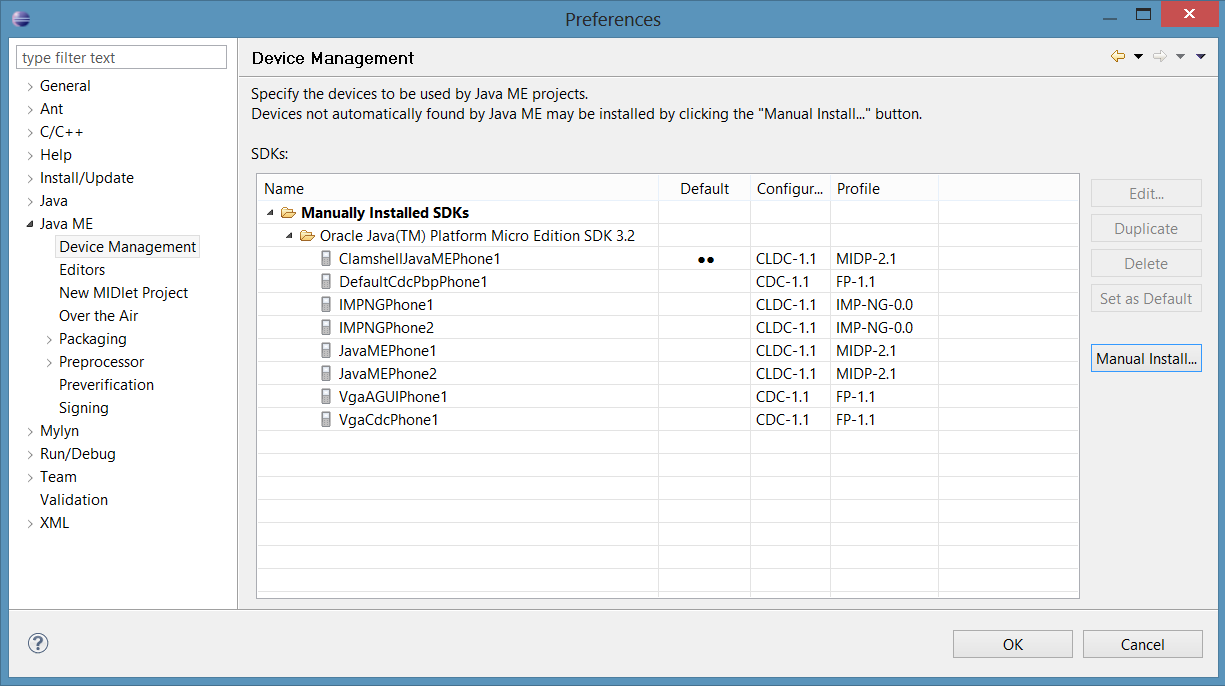 If your aim is to just retrieve information from a database and then present them to a web user on Java EE platform, probably the easiest way is to use Java Server Pages (JSP) and JSP Standard Tag Library (JSTL) technologies. JSP is a web component model. It heavily uses  HTML, CSS, Javascript technologies to present the model to the web user. JSP is a presentation technology. In design time it is basically an HTML file. Though you can insert any java scriptlet. All JSP components are translated in run-time to a Servlet class and then the translated java codes are compiled into bytecodes by the web container . This process is done when the JSP page is requested for the first time. It is possible to tell the web container to do the translation and compilation during the deployment in order to enhance the response time . JSPs and Servlets are different components in design-time, the same component in run-time. JSP pages are dynamic while Servlets are static components. Whenever you make a change in JSP page, the web container detects the change and re-translate and re-compile the page into bytecode ready to be run on JVM.

The JavaServer Pages Standard Tag Library (JSTL) is a collection of useful JSP tags which encapsulates core functionality common to many JSP applications. One of these functionalities is found in sql tag library:
<%@ taglib prefix="sql" uri="http://java.sun.com/jsp/jstl/sql" %>
In order to use this tag library, first you must define a a data source (connection pool). In our example, we use MySQL database server:
<sql:setDataSource driver="com.mysql.jdbc.Driver"
url="jdbc:mysql://localhost:3306/world"
user="root" password="root"/>
Using a connection from the connection pool, we can send a valid SQL statement to the server:
<sql:query var="continents">
SELECT DISTINCT CONTINENT FROM COUNTRY
</sql:query>
The result set is stored in the variable continents.  Another example is given below:
<c:if test="${not empty param.continent}">
<sql:query var="countries">
SELECT * FROM COUNTRY WHERE continent= '${param.continent}'
</sql:query>
</c:if>
where the result set stored in the variable countries contains countries in the selected continent ${param.continent}.
In the sample application we ask for a continent from the user. User selects the continent and then press the List button. The page displays the countries in the selected continent.  The complete solution is given in the following Jsp code, index.jsp:

The solution contains jQuery to add zebra effect to the table. You can download jQuery from http://www.jquery.com. Sample screen shots are given below: 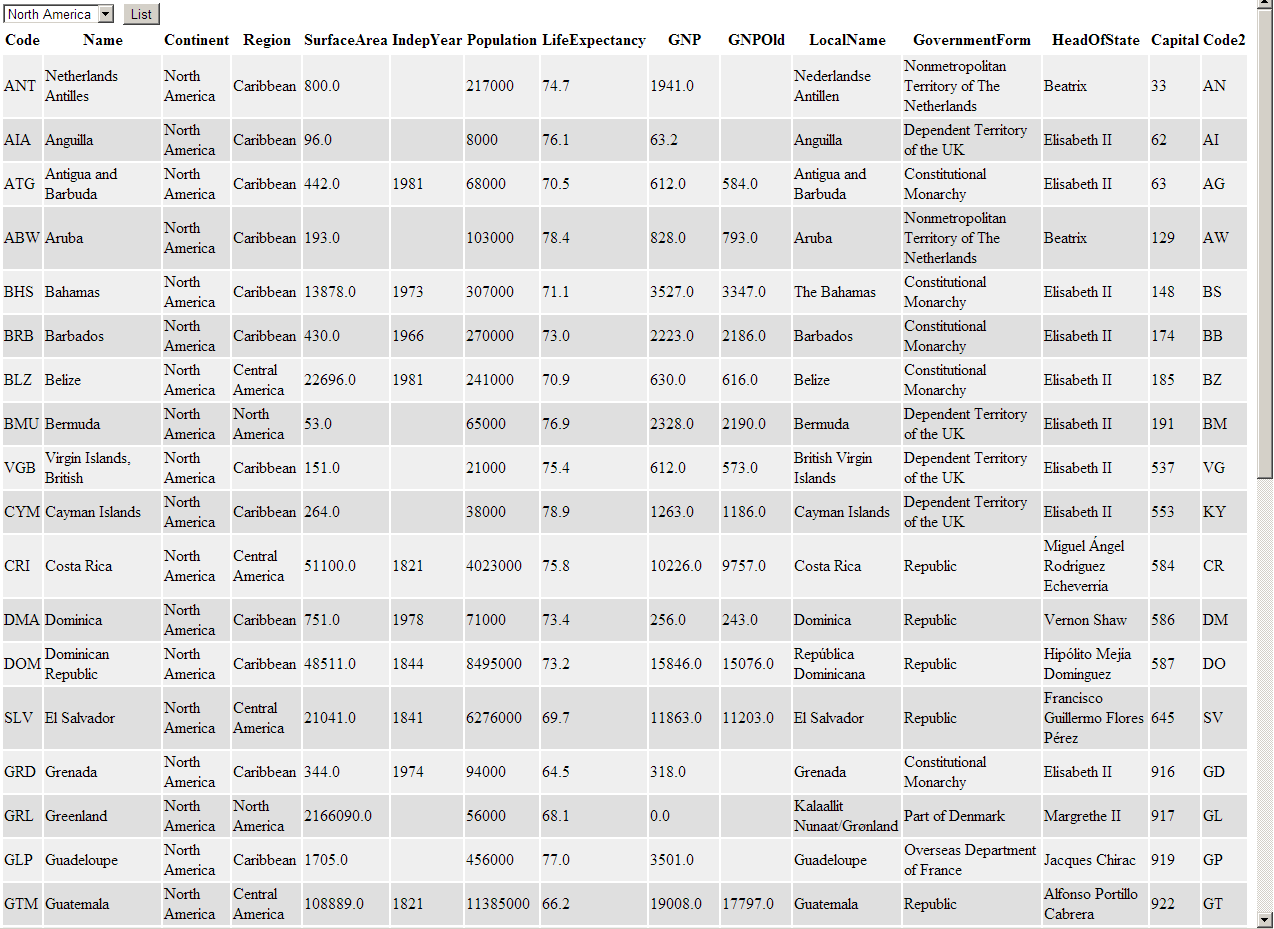 You can download world database following the link. You can read the pdf to learn how to install MySQL and the world database. Changing this solution to Ajax-based application is simple. First we partition index.jsp into search.jsp and countries.jsp. Second, we add jquery code which sends the request asynchronously and makes partial update when the response is received:
$('#listButton').click(function(){
var continent= $('#selectContinent').val();
$.ajax({
method: "GET",
url: "countries.jsp",
data: "continent="+continent,
success: function(responseData){
$('#result').fadeOut('fast');
$('#result').html(responseData).fadeIn('slow');
}
});
});


countries.jsp sends only the table containing the countries in the selected continent.

How to change processor affinity in Windows and Linux

We have been playing multiple core processor systems for a long time. It is good to know that there are several cores available to run so many processes and threads in your system. The operating system is responsible how the processes are assigned to the cores. Usually you do not care how this process works. Actually modern operating system kernels are really successful to evenly distribute the load among the cores and can sometimes even migrate a thread or a process from one core to another if it is required. But sometimes you need to control or restrict the threads of a process to a subset of the cores. In Windows operating system you can easily restrict the threads to run on specific CPU's by using start command available since Windows XP.
Let's take a look at the start command line parameters:

s>start /?
Starts a separate window to run a specified program or command.


ABOVENORMAL Start application in the ABOVENORMAL priority class.
BELOWNORMAL Start application in the BELOWNORMAL priority class.
NODE        Specifies the preferred Non-Uniform Memory Architecture (NUMA)
node as a decimal integer.
AFFINITY    Specifies the processor affinity mask as a hexadecimal number.
The process is restricted to running on these processors.

The affinity mask is interpreted differently when /AFFINITY and
/NODE are combined.  Specify the affinity mask as if the NUMA
node's processor mask is right shifted to begin at bit zero.
The process is restricted to running on those processors in
common between the specified affinity mask and the NUMA node.
If no processors are in common, the process is restricted to
running on the specified NUMA node.
WAIT        Start application and wait for it to terminate.
command/program
If it is an internal cmd command or a batch file then
the command processor is run with the /K switch to cmd.exe.
This means that the window will remain after the command
has been run.


or a console application.

parameters  These are the parameters passed to the command/program.

NOTE: The SEPARATE and SHARED options are not supported on 64-bit platforms.

Specifying /NODE allows processes to be created in a way that leverages memory
locality on NUMA systems.  For example, two processes that communicate with
each other heavily through shared memory can be created to share the same
preferred NUMA node in order to minimize memory latencies.  They allocate
memory from the same NUMA node when possible, and they are free to run on
processors outside the specified node.

These two processes can be further constrained to run on specific processors
within the same NUMA node.  In the following example, application1 runs on the
low-order two processors of the node, while application2 runs on the next two
processors of the node.  This example assumes the specified node has at least
four logical processors.  Note that the node number can be changed to any valid
node number for that computer without having to change the affinity mask.

If Command Extensions are enabled, external command invocation
through the command line or the START command changes as follows:


non-executable files may be invoked through their file association just


by typing the name of the file as a command.  (e.g.  WORD.DOC would
launch the application associated with the .DOC file extension).
See the ASSOC and FTYPE commands for how to create these
associations from within a command script.


When executing an application that is a 32-bit GUI application, CMD.EXE


does not wait for the application to terminate before returning to
the command prompt.  This new behavior does NOT occur if executing
within a command script.


without an extension or path qualifier, then "CMD" is replaced with
the value of the COMSPEC variable.  This prevents picking up CMD.EXE
from the current directory.


extension, then CMD.EXE uses the value of the PATHEXT
environment variable to determine which extensions to look for
and in what order.  The default value for the PATHEXT variable
is:

Notice the syntax is the same as the PATH variable, with


When searching for an executable, if there is no match on any extension, then looks to see if the name matches a directory name.  If it does, the START command launches the Explorer on that path.  If done from the command line, it is the equivalent to doing a CD /D to that path.

The option affinity is the one we are interested in.  This option takes one parameter which instructs the process scheduler that the process threads run only on the selected subset of the cores. The parameter is an integer given in base 16. For 2-core hyper-thread cpu, operating systems senses 4 logical CPU's and let's denote them as CPU0, CPU1, CPU2 and CPU3. In the table given below, you can easily follow how the parameter controls which cores are used:


The code simply prints the number of cores available out to the console. Here are the results:

It is easy to do the same thing in Linux with the help of taskset command which is basically use the same mask defined in Windows. The manual page of taskset is given below:

The  CPU  affinity  is represented as a bitmask, with the lowest order bit corresponding to the first logical CPU and the highest order bit corresponding to the last logical CPU.  Not all CPUs may exist on a given system but a mask may specify more CPUs than are present.
A  retrieved  mask will reflect only the bits that correspond to CPUs physically on the system.  If an invalid mask is given (i.e., one that corresponds to no valid CPUs on the current system) an error is returned.  The masks are  typically  given  in  hexadecimal. For example,

When taskset returns, it is guaranteed that the given program has been scheduled to a legal CPU.

OPTIONS
-p, --pid
operate on an existing PID and not launch a new task

USAGE
The default behavior is to run a new command with a given affinity mask:
taskset mask command [arguments]

You can also retrieve the CPU affinity of an existing task:
taskset -p pid


Here is the sample usage of taskset command on running firefox: